As with any organization, Adams State University (ASU) uses social media sites such as Twitter and Facebook to promote itself. This is understandable, however social media can sometimes allow for some unvarnished honesty to make its way into the public discourse.  This report chronicles a few notable examples of uncomfortable truths slipping out on social media despite an unwavering parade of manufactured cheer.

For several years now, a Facebook group called Adams State Memes has been curating comical images with biting humor towards Adams State from a student perspective, such as problems with Computing Services or the high cost of textbooks in the bookstore. More intriguing still is the theme that ASU is not a “real” university or that its academic standards are “so easy a caveman could do it.” Here are a few highlights:

Other times, a post by Adams State veers off the intended topic when commentators raise issues of concern. In one memorable exchange, a student laments having their view of the mountains blocked by a “great white balloon” and questions an ongoing prioritization of athletics facilities over academic buildings—even without adequate heating, while a coach responds by telling the student to stop complaining because athletics is what is keeping Adams State financially afloat. This is illustrative of common dynamics at ASU.

A recent panel discussion on income inequality raised concerns from one Facebook user who pointed out the lack of diversity among the panelists, which is commonly-noted as a problem with ASU being a Hispanic Serving Institution with disproportionately Caucasian faculty. 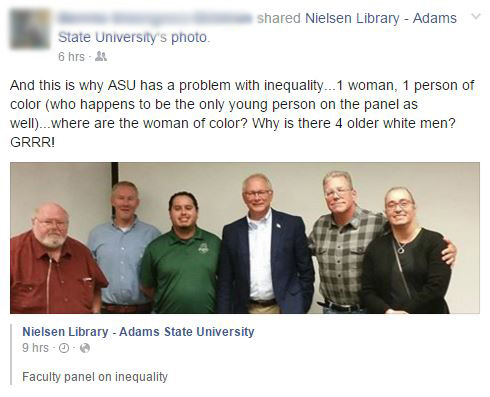 Another Facebook user questioned how much “safety” was really being created by the ban of Watching Adams publisher Danny Ledonne from campus and the rationale for its connection to a videogame created a decade earlier. 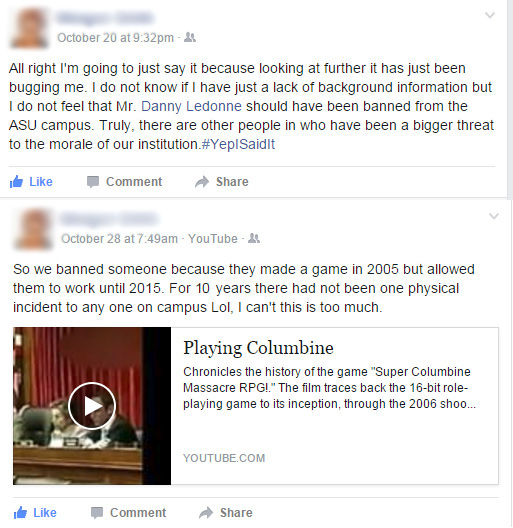 Prompted by a recent article in Westword, many faculty at other institutions commented on this same controversy.

Sometimes, social media merely reveals existing tensions that pervade on campus. One employee “unfriended” another on Facebook by explaining, “I am unfriending all Adams State people. Nothing personal against you, but you have friends I don’t trust and frankly don’t like me. I’ve had some things come back to bite me.” When an institution struggles to foster trust among its colleagues, social media can be seen as a liability rather than a useful networking tool. With wide disparities in workplace trust at ASU, it’s no surprise that social media becomes a manifestation of a deeper problem.

In another instance, one employee was openly admitting on social media that they were struggling to make ends meet due to low pay (see CUPA Data Reveals Longstanding Pay Inequities at Adams State).  Between rent, groceries, student loans, and other expenses, ASU was simply not paying enough for them to stay financially afloat.  Following this, the employee was reprimanded by their supervisor for having mentioned struggling with paying bills due to low compensation at ASU. The employee deleted their social media profile soon after. Yet there is nothing in the ASU Faculty Handbook that establishes any policy or protocol for social media use by employees.  Absent that, it’s a supervisor’s discretion when and how they discipline employees for such “disruptive” Facebook conduct as admitting ASU wages are keeping them in poverty.

In a recent civility training at ASU, one employee reported the sense that they were essentially encouraged not to interact on social media at all. Rather than being leveraged as tools for engagement, recruitment and retention, administrators tend to view social media as a kind of messaging they cannot control – and is thereby threatening to their hegemony over the university’s image.

The instances described in this article might explain why ASU has a social media problem, and that attempting to discourage individual use of social media in critical ways (while maintaining it as a tool for self-promotion) remains the prevailing, and repressive, administrative response.

Meanwhile, WatchingAdams.org is now the top hit on Google for the search term “Watching Adams.”  This means that the world wide web is now indeed watching Adams. 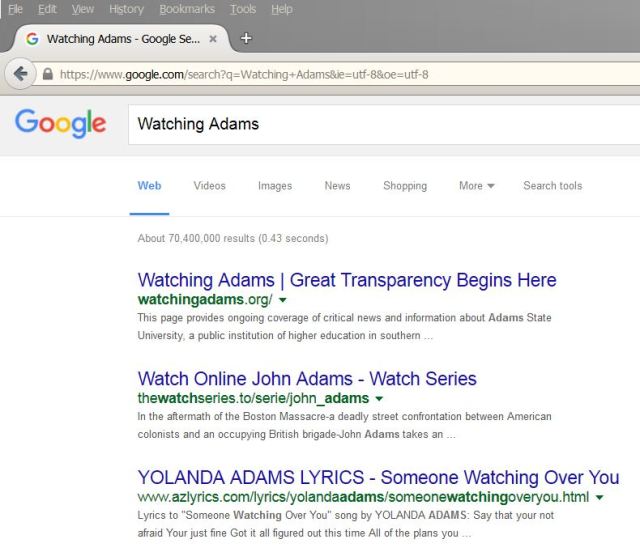