In an October 20th email to the campus, Adams State University (ASU) President Beverlee McClure maintained, “Under my leadership, Adams State University will remain as open and transparent as possible.” This is a respectable goal and one that every public institution should have as part of its core operating principles. However, the administration’s official conduct has been much more opaque than President McClure’s claim would imply.

Recall that President McClure has banned Watching Adams publisher Danny Ledonne from “administrative meetings” under the threat of arrest by campus police. President McClure has refused to identify which meetings those would be or what policy she is using to make this determination. She stated in an October 13th email, “Administrative meetings, such as Executive Council, President’s Cabinet, Faculty Senate, etc. are not subject to Open Meetings and are for University employees only.”

Without any working definition of which meetings are “administrative,” it is difficult to understand how Faculty Senate, without any members of administration in the governing body, would qualify. Yet Faculty Senate is much more responsive at keeping current meeting minutes posted for public review. 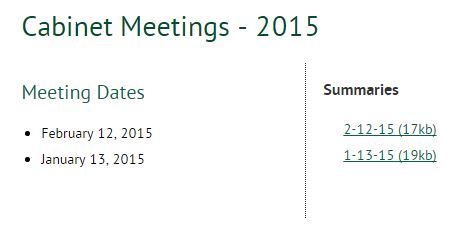 President McClure claims that her leadership will ensure ASU is “as open and transparent as possible,” yet ASU administration has been failing to post its meeting minutes, which are fundamental to public transparency.