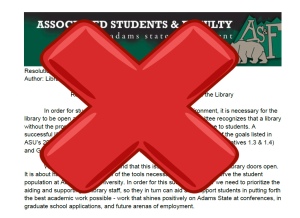 As previously reported in AS&F Prioritizes ASU Library, the Associated Students and Faculty (AS&F) government unanimously passed a resolution on February 15th to prioritize funding for the Adams State University (ASU) Nielsen Library. Sources report that AS&F presented to the Executive Team on March 7th to bring the resolution before ASU upper administration. However, reports indicate that “there was no room in the budget for the position, for at least the next budgetary period.”

The resolution stated, in part: “Knowing full well that budgets are tight across the board and many departments are faced with the predicament of frozen position(s), we believe that the library needs to be prioritized highly. High prioritization is necessary because the library directly impacts students and plays a large role in the success rate of both graduate and undergraduate programs.”

Meanwhile on March 9th, the ASU Grizzly Club recently received a $60,000 donation from the Alamosa County Commissioners through the Colorado Lottery fund. The donation has been designated to ASU Athletics “for specific projects to be determined.” The cost of refilling the frozen library position, User Experience Librarian, would be approximately $38,500 annually.

UPDATED – VP of External Affairs/Student Trustee Azarel Madrigal replied with an update and clarification on this story when asked why the resolution “was not upheld.” She stated:

The Library Committee was formed in order to address student concerns regarding the library. As a committee, myself included, we decided to draft a resolution in support of the library and recognizing the concerns that [Library Director] Carol Smith brought to our attention. Associated Students and Faculty is not a policy making body. Therefore, the term “upheld” is being used incorrectly. AS&F passed a resolution fully aware of the budgetary constraints facing the university. The executive team and Dr. McClure received our recommendation in a positive manner and it will be taken into consideration when the 2016-2017 budget is created. I can’t speak for the other committee members but I am satisfied with the current outcome and believe we have made a step in the right direction.

Further questions may be directed to: madrigala@grizzlies.adams.edu