After months of internal speculation regarding ongoing friction between Adams State University (ASU) President Beverlee J. McClure and Vice President for Academic Affairs Chris Gilmer, the Office of the President made a campus-wide announcement of Dr. Gilmer’s resignation “effective immediately.”  The statement reads in full:

Dr. Chris Gilmer has resigned as Vice President for Academic Affairs effective immediately. His statement can be read by clicking on the following link: http://adams.edu/president/img/gilmer-signed-statement-2-4-17.pdf

I admire Dr. Gilmer for taking a stance on the issues. We will provide more information about plans for the interim in the coming days. 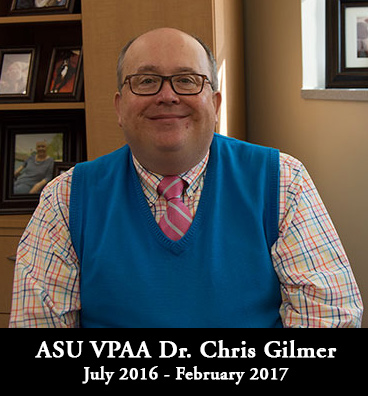 DR. GILMER’S STATEMENT IS NOT A LETTER OF RESIGNATION

Watching Adams acquired the original PDF document (saved as an image-embedded file) and posted a clean, text-enabled version for ease of analysis and archival use.  According to the metadata on the original PDF file hosted on the ASU network, the statement was scanned into Adobe Acrobat at 3:09pm on 2/6/17.  No author or other identifying metadata is present in the original file.  A prominent line streaks across the left center of both pages.

Dr. Gilmer’s statement was signed Saturday, February 4th and the email from the President’s Office announcing his resignation was released on Monday, February 6th.  Dr. Gilmer’s statement indicates that “the friendship which President McClure and I formed quickly and easily has unfortunately dissolved and has begun to affect the university in a negative way.” The statement makes no mention of any resignation, does not explain why he has chosen to resign, and does not state as a matter of fact that he has chosen to resign.

The statement from Dr. Gilmer contains several passages in support of President McClure and refuting previous reporting by Watching Adams, characterizing the site as “spread[ing] misinformation”  concerning Dr. McClure’s conduct, and more broadly “claiming to operate in the public interest as figurative watchdogs can risk inciting a sort of Internet mob mentality by omitting key facts or putting people in false lights.” The statement makes no specific details or evidence to support these claims or what key facts were omitted.

Dr. Gilmer’s statement included references to the ACLU court case filed on behalf of former faculty member Danny Ledonne, which was settled prior to Dr. Gilmer’s hire as VPAA.  The statement reads in part, “Free speech and due process, founding principles of our nation, can be at odds, and we must search for balance in all things.”  The statement does not explain by whom these balances should be struck or how free speech and due process are at odds.

It is similar to the statement by resigned ASU Police Chief Paul Grohowski regarding the banning of Ledonne from the ASU campus in October 2015: “It is my duty to balance the free speech and individual rights against the public safety of the many.”  Upon information and belief, many concluded that the document was not drafted by Grohowski, who weeks earlier admitted to Ledonne at his residence that he had little awareness of the circumstances involved.

Upon review by several current and former ASU employees, one individual stated, “Dr. Gilmer’s statement is not a resignation letter. The letter is a contract that Chris signed in exchange for something, likely something quite large.”

Another observer stated, “To me, Gilmer’s statement suggests that he knows at the time of writing what is probably coming in the approaching hours. It was also clearly written with an awareness that it would become publicly widespread. To me, I hear a man explaining his situation to his future employer and attempting to distance himself from anything that may cause doubt in his candidacy for a future position.”

One former employee concluded, “It is hard to imagine what purpose this statement serves the institution given its need to transition smoothly and assure compliance with the HLC’s criteria.  Much of it reads as a defense of President McClure’s image, one that is fundamentally at odds with Dr. Gilmer’s own observations and experiences.”

Dr. Gilmer accepted the position of VPAA in July 2016.  He advocated for the Hall of Research in ASU’s McDaniel Hall and spearheaded efforts for the National Center for Historically Underserved Students on the ASU campus.  He was VPAA for approximately 6 months.

Many sources on campus indicated that tensions between President McClure and Dr. Gilmer began to escalate during the fall 2016 semester.  In August 2016, Dr. Gilmer commissioned the Mathieu Report, an independent investigation which found ASU’s Extended Studies program to be “largely dysfunctional” with “very serious deficiencies” and “a culture of questionable academic practice that appears to have been in place for many years.”  The report was released in September 2016 and Dr. Gilmer solicited campus-wide feedback to address the findings of the investigation.

While President McClure had previously claimed in a March 2016 letter to the Higher Learning Commission (HLC) that the problems which led to the university being placed on academic probation had been addressed and the sanction was unwarranted, the Mathieu Report recommended shutting down the Office of Extended Studies entirely and replacing it with an Office of Continuing Education, noting significant structural problems beyond those which President McClure claimed had already been addressed.

In October 2016, President McClure wrote again to the HLC, requesting an extension from April to November 2017 for the university’s comprehensive review towards re-accreditation.  In this letter, President McClure makes repeated mention of Dr. Gilmer’s responsibilities and credits herself with commissioning the external review of Extended Studies, stating:

“Our new Vice President for Academic Affairs, Dr. Chris Gilmer, was hired largely due to his extensive leadership in distance education, much of it spent in the Historically Black College and University (HBCU) system. He has also held leadership roles preparing institutions for accreditation review by HLC and the Southern Association of Colleges and Schools.

I have charged him, based on his expertise in online education and in supporting historically-underserved populations, to lead a comprehensive review and redesign of our distance education programs.

Dr. McClure does not explain why she ordered the Mathieu Report only after Dr. Gilmer was hired and after claiming that the Higher Learning Commission placed ASU on academic probation because ASU was “obviously… chosen by the HLC to make some sort of political statement” and claimed ASU was “left feeling like HLC’s whipping boy, with none of the benefits of HLC membership.”

Despite Dr. Gilmer’s job duties as Vice President for Academic Affairs, sources confirm that oversight of accreditation responsibilities during the HLC review process were given instead to Margaret Doell, Assistant Vice President for Academic Affairs.  While Dr. Gilmer solicited feedback from the Mathieu Report, sources indicate that he felt impeded by President McClure in the implementation of those recommendations.

Many ASU employees have previously noted an ongoing pattern of cronyism in and outside the workplace between President McClure and AVPAA Margaret Doell.  Doell has been identified as having little experience in higher education administration and accreditation proceedings.  Doell applied for the VPAA position after Dr. Frank Novotny stepped down in December 2015, but Dr. Gilmer was chosen instead.

A Watching Adams commentary on Dr. McClure’s October 29th, 2016 Halloween costume identified the party as being “hosted by an obese employee and his obese partner.”  The commentary, President McClure’s Lack of Empathy is Undermining ASU’s Historic Mission, argued that Dr. McClure’s choice to “dress in a fat suit, portraying a plumber with rotting teeth” was a source of painful discomfort for many in the ASU community from working class backgrounds.  Since publication, Watching Adams has confirmed from Dr. Gilmer’s statement that this Halloween party was hosted by Dr. Gilmer and his husband.

UPDATED 2/10/17: President McClure emailed the campus with an update on the transition process.  The email gives no explanation regarding Dr. Gilmer’s statement or non-statement regarding the resignation.

UPDATED 2/15/17:  The original PDF of Dr. Gilmer’s statement has been updated on the ASU website, now without the vertical streak but rotated clockwise about 5 degrees.  The first original statement is preserved here.