After four months of litigation in Federal District Court, the involvement of the Colorado Attorney General’s Office and the American Civil Liberties Union, and an extensive document discovery process, the matter of former faculty Danny Ledonne being banned from Adams State University campus was settled out of court.  It brings to a close almost a year of deliberate and willful lies told about Danny Ledonne by the ASU administration in an apparent interest to remove one of its critics under patently fabricated pretenses.

After six months of attempting to resolve a faculty hiring complaint filed with the ASU Office of Equal Opportunity, Ledonne’s video contract was terminated without explanation and his campus email was cut off even as he requested its ongoing use for the upcoming Southern Colorado Film Festival. In September 2015, Ledonne launched WatchingAdams.org and began publishing previously undisclosed university salary data.  In October 2015, Ledonne published the first in a series of articles detailing delayed payments to adjunct faculty, delayed response to open records requests, and requiring users to identify themselves in order to access public data.

Two days later, Ledonne was served a no trespass order threatening him with arrest if he were to step onto ASU property.  The letter cited “alleged behavior” nowhere specified in the document or in subsequent inquiries Ledonne made on the matter.  Ledonne’s attempts to settle the matter before court were quickly sabotaged by the ASU administration.

In February 2016, Ledonne filed suit with the representation of the ACLU of Colorado, alleging that his First Amendment rights to assembly and to receive information on a public university campus and his Fourteenth Amendment right to due process under law prior to being banned from a public university campus were violated.  ASU publicly declared it would prevail in court, even before their attorneys with the Attorney General’s office had reviewed the case.  Upon doing so, ASU’s lawyers instead moved swiftly to settle the matter out of court just after the preliminary injunction hearing in March 2016.

In July 2016, the campus ban against Ledonne was lifted, neither side admitted to wrongdoing, and no confidentiality agreement was reached between the plaintiff and defendants regarding the case. A $100,000 settlement was paid to plaintiff Danny Ledonne and the Colorado ACLU Foundation, despite a highly misleading series of press releases by ASU that didn’t mention the settlement amount nor that the campus ban was lifted.

What Did ASU Lie About?

Many observers initially trusted ASU President Beverlee McClure, being a leading authority figure, for having made the decision to ban Ledonne from all campus grounds and without due process. McClure repeatedly claimed to ASU faculty, staff, students, and the general public that Ledonne: 1) had made “threats of violence” including “physical violence,” 2) engaged in “harassment and terrorism,” 3) made “direct and indirect threats against individuals and the campus as a whole,” and 4) was on a “watch list with the Colorado police.”  McClure made a practice of bringing a thick binder to campus-wide meetings held for the sole purpose of justifying the ban, referring to the binder as “Ledonne’s file.” Observers were quoted as saying, “we don’t know what is in that file” and thus many believed McClure’s assertions at face value.

However, a thorough review of the evidence, including hundreds of pages of documents submitted to the ACLU by the AG’s attorneys, demonstrated either a complete lack of evidence to support these claims or that the claims were provably false. Tellingly, the Attorney General’s lawyers (representing ASU in Federal District Court) submitted zero documents to the court and called zero witnesses; this is how little ASU’s own legal counsel appeared to think of their client’s case. This is also why the defendants appeared so eager to settle the case during mediation – paying for the cost of a federal judge to review the case and offering a $100,000 settlement to prevent the case from going to trial.

A Colorado Bureau of Investigations file was created by ASU on Ledonne weeks after the ban, the results of which yielded no actionable intelligence and produced only innocuous public records as there is no criminal record or police complaints of Ledonne.  During the discovery phase, attorney interrogatories from the ACLU revealed a number of clear problems with the university’s position.

President McClure “didn’t recall” using the word “terrorism” as quoted in the Valley Courier in November 2015. She also claimed that the “police watch list” response was merely because someone asked her about the university’s actions.   Unfortunately, audio-recorded transcripts of these statements show otherwise.   A sergeant with the Colorado State Patrol confirmed in a signed affidavit that there is no such thing as a “police watch list.“ 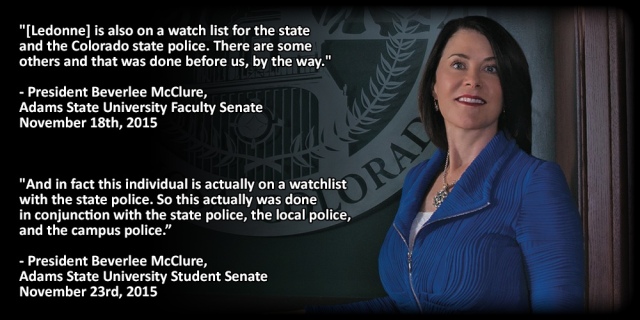 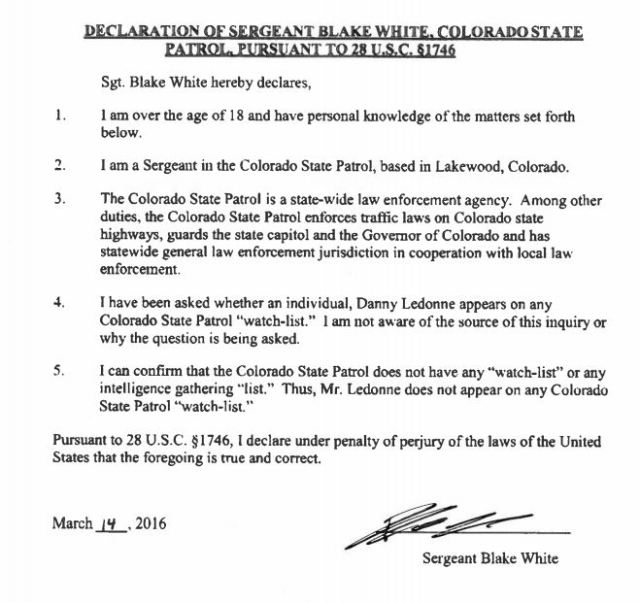 Most notably, McClure was unable to answer in a direct and specific manner why Ledonne was banned, instead relying on vague statements about “a pattern of behavior.”  McClure’s explanation for Ledonne’s ban kept shifting, being the hallmark of any ongoing and escalating lie.

Both President McClure and (now resigned) Police Chief Paul Grohowski admitted that Ledonne had not broken any law.  Yet Ledonne was denied access to a public university campus – including presentations, performances, and library services – without an impartial hearing or meaningful notice of the allegations against him.  The Constitutional problems created by Beverlee’s Bluff  brought attention from the ACLU to represent Ledonne pro bono and with a commitment to go to a jury trial with years of litigation if necessary. Adams State likely recognized this problem of their own creation and embroiled the Colorado Attorney General’s Office in the controversy.

Did Ledonne Threaten Anyone?

The conclusion reached by the ACLU is that Ledonne never threatened anyone.  In his efforts to resolve the 2015 hiring dispute (in which Ledonne discovered numerous factual, procedural, and technical errors in the Mass Communications faculty search process), he contacted numerous ASU offices to have multiple employment matters addressed and to preserve his access to campus resources while serving as director of the Southern Colorado Film Festival, held on campus in October 2015.

Ledonne utilized the prescribed channels including the Office of Equal Opportunity, the President’s Office, and the Board of Trustees. Ledonne requested an internal investigation, appealed the initial OEO decision upon reviewing his own score sheets obtained through an open records request, proposed an alternative solution to former president David Svaldi, proposed this solution to the Board, and finally requested mediation to resolve the matter at the suggestion of former OEO director Joel Korngut. All of these steps are well-documented and verified by multiple sources.

Ledonne also circulated a letter of support for his candidacy for full time employment in March 2015, which was signed by approximately 80 ASU faculty, staff, students and community members and presented to the Board of Trustees in May 2015.  Ledonne was thanked by Board Chair Arnold Salazar for the “respectful and constructive tone of [his] presentation” and encouraged Ledonne to “continue to be a part of the university community.”

A June 2015 online conversation between Ledonne and a member of the Svaldi family, in which the topic of Ledonne’s employment was initiated by the other party, was reviewed by the ASU Campus Health and Safety Committee and determined that Ledonne was not a threat to the safety of the campus. Ledonne requested mediation to resolve this matter fully, which was not honored.  In early October 2015, Ledonne appeared before the Board of Trustees during public comment to request mediation for his hiring concerns.  This request was ignored.  Instead, Ledonne was banned from campus without due process just 12 days later.

All of these acts were protected First Amendment activity.  At no time did Ledonne engage in actions that could be construed by a reasonable person as threatening nor did any court of law rule otherwise.

A subsequent review of notably selective information provided by ASU Administration to the Denver-based firm Nicoletti-Flater in November 2015 (conducted about 4 weeks after Ledonne was already banned from campus and without his participation) concluded the following: 1) Ledonne was not a threat to the physical safety of campus, 2) Ledonne could be potentially disruptive to campus functions, and 3) banning someone from campus in this disengaged manner could elevate the threat level they posed. This third finding was predicted by the editorial ASU Administration Fails to Act in Students’ Best Interests, citing FBI and Secret Service data and concluding that ASU’s actions ran completely contrary to the best practices to take in a situation involving a potential safety issue to a college campus.

ASU’s own inaction also ran contrary to McClure’s claims that Ledonne was a threat. ASU took no meaningful steps to address the matter using the legal framework provided by a court of law; at no time did ASU file charges of threatening violence, seek a restraining order from Ledonne, or seek a search warrant of Ledonne’s property to determine his capacity for violence. No police reports were filed at any time with either the ASU PD or Alamosa PD regarding Ledonne.

What Should the Public Conclude?

It is up to individuals to conclude for themselves if Ledonne should have pursued his employment concerns as vigorously as he did. It is up to individuals to decide why President McClure lied to the campus and community in banning Ledonne without due process. But it is now clear, having had the ACLU represent Ledonne in asserting his First and Fourteenth Amendment rights, that the ASU Administration made a series of expensive, embarrassing, and egregious errors in banning Ledonne from campus while falsely branding him as a “threat to campus safety” as ad-hoc justification for doing so.