Enrollment at Adams State University (ASU) continues to decline in the fall 2017 semester, furthering a downward trend going back about five years.  According to fall 2017 enrollment statistics, 126 fewer undergraduates enrolled this year, bringing the total down to 1731 students,  a 7% decline from the previous year.  This is in addition to a 3% decline from fall 2016.

Since President Beverlee J. McClure took office in July 2015, the two year decline of ASU undergraduates totals 190 students, or about -10%.

Likely due to larger cohorts of ASU students moving through their degree programs, the only class to see increased enrollment from 2016 to 2017 was the senior class, which was up by 24 students (+6%).  However, the incoming freshman class dropped by 82 students (-12%), sophomores declined by 31 students (-8%), and juniors decreased by 64 students (-17%).

This trend of lower incoming student enrollment is despite ASU offering a Guaranteed Tuition program beginning in fall 2016.  As Watching Adams reported in October 2016:

This ongoing drop in enrollment happened despite ASU introducing Guaranteed Tuition in fall 2016, a marketing strategy to attract undergraduate students which, thus far, has not succeeded. However, Guaranteed Tuition was cited by Moody’s Investors Service as a reason for downgrading ASU’s credit rating to A3 negative, the lowest A-grade rating. Guaranteed Tuition has also generated many additional administrative costs in order to track the cohorts of students moving through ASU’s financial system.

Watching Adams has also reported that, when faced with financial challenges, many universities have abandoned their guaranteed tuition programs.

As previously reported, ASU’s six-year graduation rate is 25.7% lower than the state average.

In response, ASU stated, “we are working diligently to correct all the issues and reverse that status, and are confident that we will. However, recruitment and retention are even more challenging to address when on probationary accreditation status.”

The university’s probationary status with the Higher Learning Commission could be removed in February 2018, or the university may lose accreditation for documented violations of academic integrity. 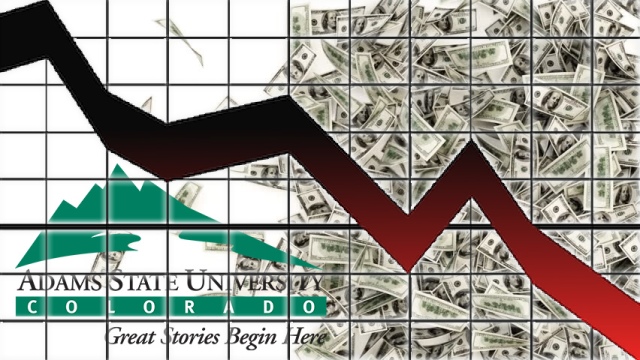 On August 25th 2017, the ASU Board of Trustees stated that it has “authorized the university administration to formulate a contingency plan to right-size staff in the event on-campus enrollment continues to decline.”

From the same August 25th announcement:

“We do not anticipate layoffs. We intend to address this as much as possible through retirements and attrition,” said Adams State President Beverlee J. McClure. Currently, enrollment in on-campus undergraduate, semester-based credit courses is down approximately 6 percent from last fall. Total enrollment, including distance courses, is down 3 percent. “We hope to decrease this gap by our census date, September 6.” She added the contingency plan would be developed based on data and enrollment trends and by working with campus constituent groups.”

At the time of the September 6th census date, the on-campus enrollment gap widened by another 1%.

In addition to declining student enrollment and diminishing financial performance, ASU has experienced a high degree of employee turnover, with over 45 full time employees departing during the 2016-2017 academic year.  Among those to leave are multiple admissions, recruitment, and student services personnel.

A recent Watching Adams commentary called Welcome to the Adams State Hunger Games argued that this high turnover due to “attrition” has been viewed by the administration and board as a beneficial cost-saving measure rather than a detriment to the institution’s mission and service to students.

Referring to ASU’s struggle to retain accreditation in 2018, a current ASU employee noted, “Looking at these dwindling numbers, accreditation won’t mean much, anyway.”

One former ASU employee agreed, “Does reaccreditation even matter at this point? It’s not a magic potion that can pull ASU back from the brink. Reaccreditation does not equate with academic quality. And rural institutions are already on the precipice, irrespective of academic rigor.”

They continued, “If the figure still holds true that every 2% drop in enrollment represents a $1M loss in revenue, we’re talking another $3.5M loss this year. But I suspect net losses increase exponentially as the figures grow more dire, because operating expenses are sticky.  Time for ‘right-sizing,’ indeed.  Guaranteed Tuition is clearly an epic fail. Wasn’t that Beverlee’s signature strategy?”