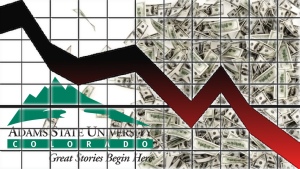 Citing campus construction expenditures totaling $98.7 million between 2009 and 2015, the performance audit noted that “the capital-intensive strategy has also resulted in a significant increase in Adams’ debt service obligations.”

Exhibits from the Huron Report are available for review here:

The sustainability of debt from university capital construction has been a topic for the Colorado Commission on Higher Education (CCHE) since early 2014.  A January 28th, 2014 Joint Budget Committee memo noted that “two small institutions—Adams State University and Western State Colorado University— had scores below 0, indicating a need to ‘assess institutional viability to survive’. A more in-depth analysis of these institutions for the period from FY 2008-09 to FY 2012-13 indicates that both institutions are highly leveraged and financially at risk.”

The memo went on to suggest that “both the executive and legislative branches should continue to carefully monitor the financial health of Adams State and Western State” and also that “the General Assembly should explore whether any of the state’s larger higher education systems are interested in merging with the smaller institutions highlighted in this issue, given the larger systems’ economies of scale and resources for implementing changes in a challenging financial environment.”

On March 23rd, 2016, the Colorado Office of the State Auditor commissioned an audit to study Adams State University and Western State Colorado University’s ongoing financial viability.  The request for proposal stated, “The impetus for conducting this performance audit is the growing trend of operating losses that Adams and Western have experienced over the last five fiscal years. The OSA contracts for the universities’ annual financial statement audits, and based on the information in these annual audits, the State Auditor would like to use this performance audit to explore the factors driving these financial trends and, more importantly, what each university is doing in response.”

For more on the declining financial conditions that led to this performance audit, see ASU Audits Reveal Deteriorating Financial Conditions.

Offsetting ASU’s mounting debt with further tuition increases was ruled to be an unlikely option, since the Huron Report noted that “Adams’ net tuition revenue per student FTE was about $5,636 in fiscal year 2014, which was the highest among the institutions included in the peer group used for this analysis. Above-market tuition increases are not likely to be a viable option for resolving Adams’ financial challenges.”

In its response published at the end of the report, ASU agreed and noted, “Our unique role and mission, serving historically underserved students in rural Colorado, does not enable us to raise tuition without an effect on our student population. The effect that reductions in state funding have had on our students was made more severe by cuts to the federal Pell programs. As we increased tuition, many of our potential students decided that college was not financially attainable, and opted not to attend any higher education institution.”

These high net tuition amounts at Adams State have been locked in for future undergraduate students with a Guaranteed Tuition program that, despite intensive marketing and optimistic statements from ASU President Beverlee McClure, have not increased overall undergraduate enrollment.

According to Exhibit 16 in the Huron Report, ASU is the most tuition and fee-dependent institution in its peer group, relying far more on student revenue than state revenue relative to similar institutions around the United States.

For more on how other universities abandoned similar programs due to budgetary shortfalls, see Other Universities Abandoned Guaranteed Tuition – Here’s Why.

According to a financial and compliance audit of fiscal years 2014-2015, ASU had approximately $73.0 million in debt and “the University’s results of operations have declined from Fiscal Year 2011 to Fiscal Year 2015… Adams State University has not been able to significantly increase enrollment and has experienced expenses that have increased at a faster pace than the revenue increases.”

The Huron Report called for ASU to explore additional revenue enhancement strategies.  President McClure said in ASU’s press release, “One such initiative is a four-year guaranteed tuition program, begun in fall 2016. This will help families to better plan for college expenses and give students incentive to complete their degrees in four years.”

Thus far, this incentive has not translated into higher enrollment.  For more on this, see Despite Guaranteed Tuition, ASU Enrollment Continues to Decline.

The ASU press release also states, “The university has also revamped its New Student Orientation and First-year Immersion programs, contributing to a 5 percent improvement in retention of students from the first to second year.”

As shown in Exhibit 14 of the report, ASU’s total student full time enrollment declined by -1.6%.  An increasing number of graduate students was offset by an even greater decline in undergraduates.  Enrollment losses are projected to continue into the 2016-2017 academic year.

In its response to the Huron Report, ASU acknowledged that being placed on academic probation for compliance violations with its Extended Studies program has made growing enrollment even more challenging.  ASU stated,  “we are working diligently to correct all the issues and reverse that status, and are confident that we will. However, recruitment and retention are even more challenging to address when on probationary accreditation status.”

The university’s probationary status with the Higher Learning Commission could be removed in February 2018, or the university may lose accreditation for documented violations of academic integrity.

The report also notes that ASU has thus far been unable to identify and address which programs have been financially nonviable.  The report states, “for the years included in our analysis, there were challenges in calculating instructional costs and related revenues on a per-program basis because of the University’s data structures. Though not uncommon in higher education, the University’s approach to cost allocation meant that constructing more nuanced, program-specific cost analyses was beyond what could be accomplished as part of this evaluation.”

One ASU employee observed, “Huron Consulting couldn’t even figure out which programs are profitable and which are a drain because ASU’s records were so bad.” 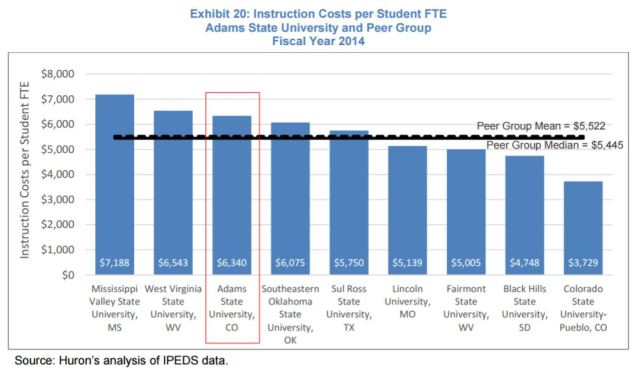 One Watching Adams commentator noted, “If we increased enrollment by 500 students, we would still be losing money, based on Exhibit 23 in the auditors’ report. We would need about 800 to break even. That’s not going to happen quickly. Things are probably even worse than the report indicates given the fact that ASU’s profits from Extended Studies will drop. The report and ASU’s response agree we can’t raise tuition substantially. Programs will be cut.”

The Huron Report does not calculate the anticipated loss of revenue from diminished course loads in ASU Extended Studies.  The university had previously been overloading some online courses with hundreds of students prior to being sanctioned by the Higher Learning Commission for these actions.

While the Huron Report recognized ASU’s 2020 Strategic Plan, our analysis of this document has concluded it is essentially “more of the same” for the university.  For more on this, see ASU’s New Strategic Plan is Neither, Nor.

MISLEADING PUBLIC PERCEPTION AND BOARD ACCOUNTABILITY

One Watching Adams commentator noted that this is similar to ASU declaring it was “Well-Positioned to Improve Debt Rating” in January 2016 after Moody’s downgraded ASU’s credit to the lowest investment grade.  In that case, ASU did not mention its credit was downgraded, but used the words “revised” and “changed”in the article.

The Denver Post also noted from the Huron Report’s press release that “Adams’ net tuition per student was about $5,636 in fiscal year 2014, which was the highest among the schools included in the peer group used in the analysis.” None of this information appears in the ASU press release.

During the Legislative Audit Committee discussion, available for MP3 download, members of the committee discussed the audit with ASU President McClure.  While McClure mentioned transitions between the previous administration of Dr. David Svaldi to her own, she did not mention Dr. Frank Novotny stepping down as VP for Academic Affairs or the sudden “resignation” of Dr. Chris Gilmer from that same position after seven months of the job.

One former ASU employee noted, “Out of all of the things President McClure said and the changes she specified that ASU is going to make, she didn’t say that ASU was going to invest in and preserve the culture of the valley.”  There is a common perception among ASU employees and community members that ASU’s “Hispanic Serving Institution” status is leveraged for financial resources but does not reflect the university’s budgetary priorities, which strongly invest in athletics.  One observer stated that “ASU is a Hispanic Enrolling Institution, but not a Hispanic Serving Institution.”

Colorado State Senator Tim Neville noted potential financial mismanagement by the university’s Board of Trustees.  He asked, “tell me about the Board because I’m looking at a situation where apparently some decisions were made, that the debt load was increased extremely high over the last few years to a point where it’s not really sustainable. So, I’m concerned, do we have the same Board? … We have this new focus, a little more of a fiscal responsibility focus, which apparently seemed to be lacking over the previous few years.”

According to ASU’s website, Board of Trustees Chair Arnold Salazar has been chair since 2013 and a member of the board since 2010.  The majority of the trustees have been appointed in 2015-2016, some of whom replaced trustees who resigned before their term had expired.

One observer noted, “Senator Neville was on point with his comments and questions regarding ASU’s academic probation. Right now the university looks like it teaches sports.”

One former ASU employee reflected on the debts incurred under the previous administration.  “I remember when President Svaldi and Board Chair Salazar were going around campus cutting ribbons to commemorate completed construction projects during 2010-2015.  There was a festive atmosphere on campus and enrollment seemed to keep climbing.  Now the bills are coming due and some students are priced out of the market, or simply wary of attending a university on academic probation.”

They continued, “in the final analysis, ASU has dug itself into a deep hole by pursuing all the wrong strategies for growth and institutional investment.  This is in part because areas like athletics and online coursework had and continues to have undue influence over the university’s mission and budgetary priorities.  University leadership doesn’t seem willing to recognize or correct these problems and somehow believes ASU can squeeze more revenue from the same low income student population…  or beg the state of Colorado for more money. But with such financial irresponsibility, why should taxpayers cover Adams States’ losses?”